The original article was posted on durangoherald.com. To read the original blog click here.

National parks get all the accolades. They get the tourists and the tour buses. Parks feature historic lodges as well as snappily-dressed park rangers with their distinctive broad-brimmed hats. But for pure wild landscapes, unpaved trails and room for my pups to roam, give me Bureau of Land Management lands in a system few Americans have ever heard of. I like it that way. But now it’s time to let the secret out and to explain National Conservation Lands and the Conservation Lands Foundation with staff members right here in Durango.

The BLM has been considered a lesser federal agency in the Department of the Interior than the National Park Service. It certainly got a later start in life, having been formed from the General Land Office and the Grazing Service to administer public lands that no one wanted. After almost two centuries of trying to give away public lands, Congress finally decided to save them. What remained after decades of mismanagement, extraction and exploitation amounted to a whopping 264 million acres under the purview of the BLM authorized in 1946. Choice acreage with tourist potential got shifted into the National Park System. On BLM lands, it was anything goes. Often, anything went. 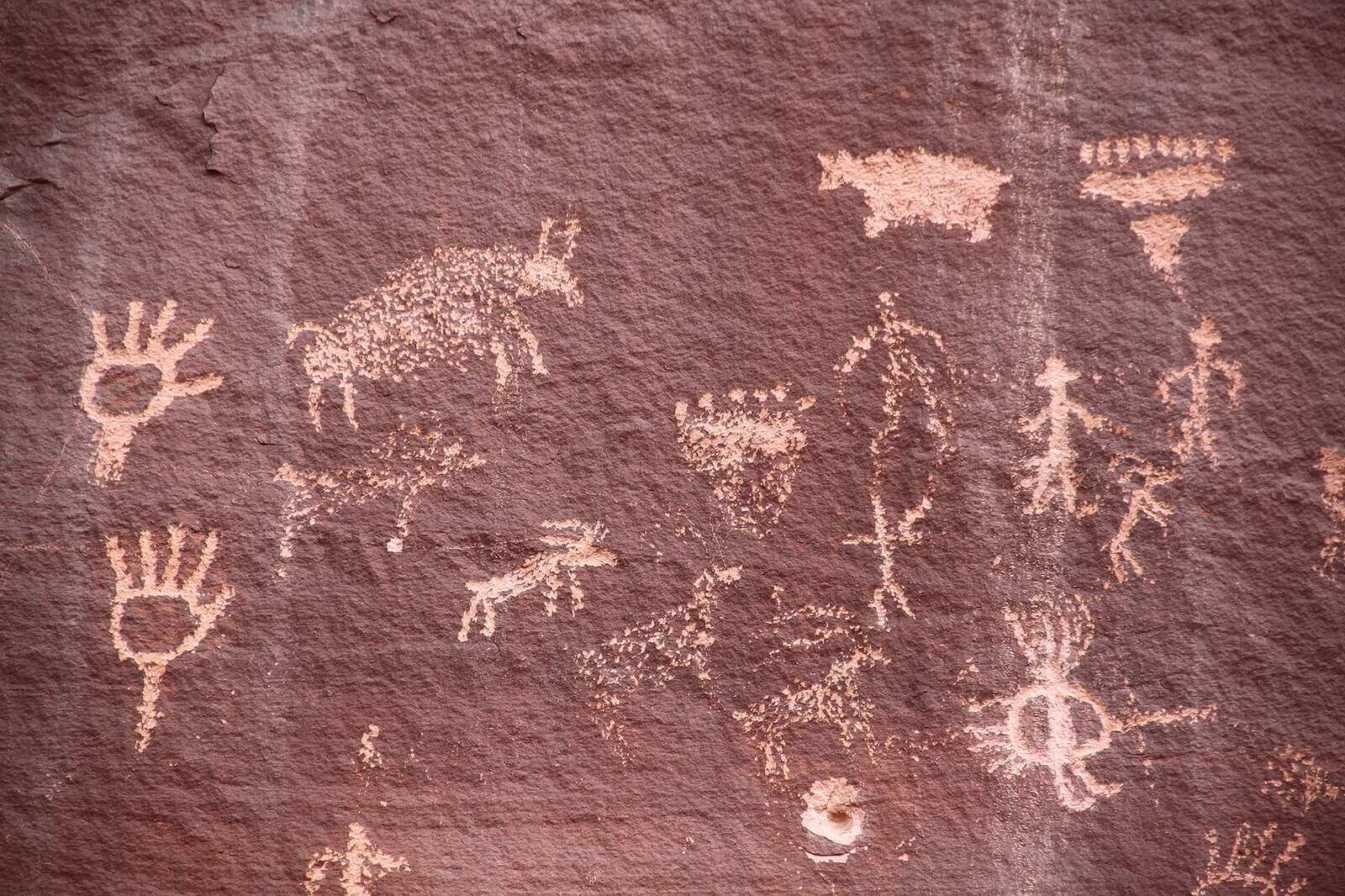 Along the Gunnison River, the Escalante-Dominguez Canyon National Conservation Area includes the Dominguez Canyon Wilderness, red rocks, rock art, desert bighorn sheep, endangered fish in the river, and a blue gray stone of Vishnu schist that is some of the oldest rock on the planet. Just at the entrance to the wilderness, an old wagon axle is part of a gate.
Courtesy of Andrew Gulliford

Under President Bill Clinton’s administration, Secretary of the Interior Bruce Babbitt had a different idea. Not only did he slip notes to the president about preserving landscapes such as Canyons of the Ancients National Monument and Grand Staircase-Escalante National Monument, he wanted to create a protective system for BLM lands. Congress also passed legislation to create National Conservation Areas out of the BLM’s vast landholdings. In the 1990s, plans coalesced for a National Conservation Land System for BLM, similar to units of the National Park System.

“In the 21st century, the BLM faces a choice,” Babbitt said in Phoenix 21 years ago. “The BLM can be the paradigm of the Interior Department’s 150th anniversary motto: Guardians of the past, stewards of the future. Or it can become a relic, a historical artifact, its most desirable lands carved up and parceled out.”

BLM has plenty of diverse landscapes, but could staff members develop an evolving ethos of conservation and protection?

Babbitt said, “In the long sweep of history, the BLM is just beginning to meet the challenge.” He described the BLM as steward for “great landscapes of the American West.” But his idea needed to gain momentum. The BLM created the National Landscape Conservation System in 2000, and Congress made it permanent through the National Landscape Conservation System Act in 2009. 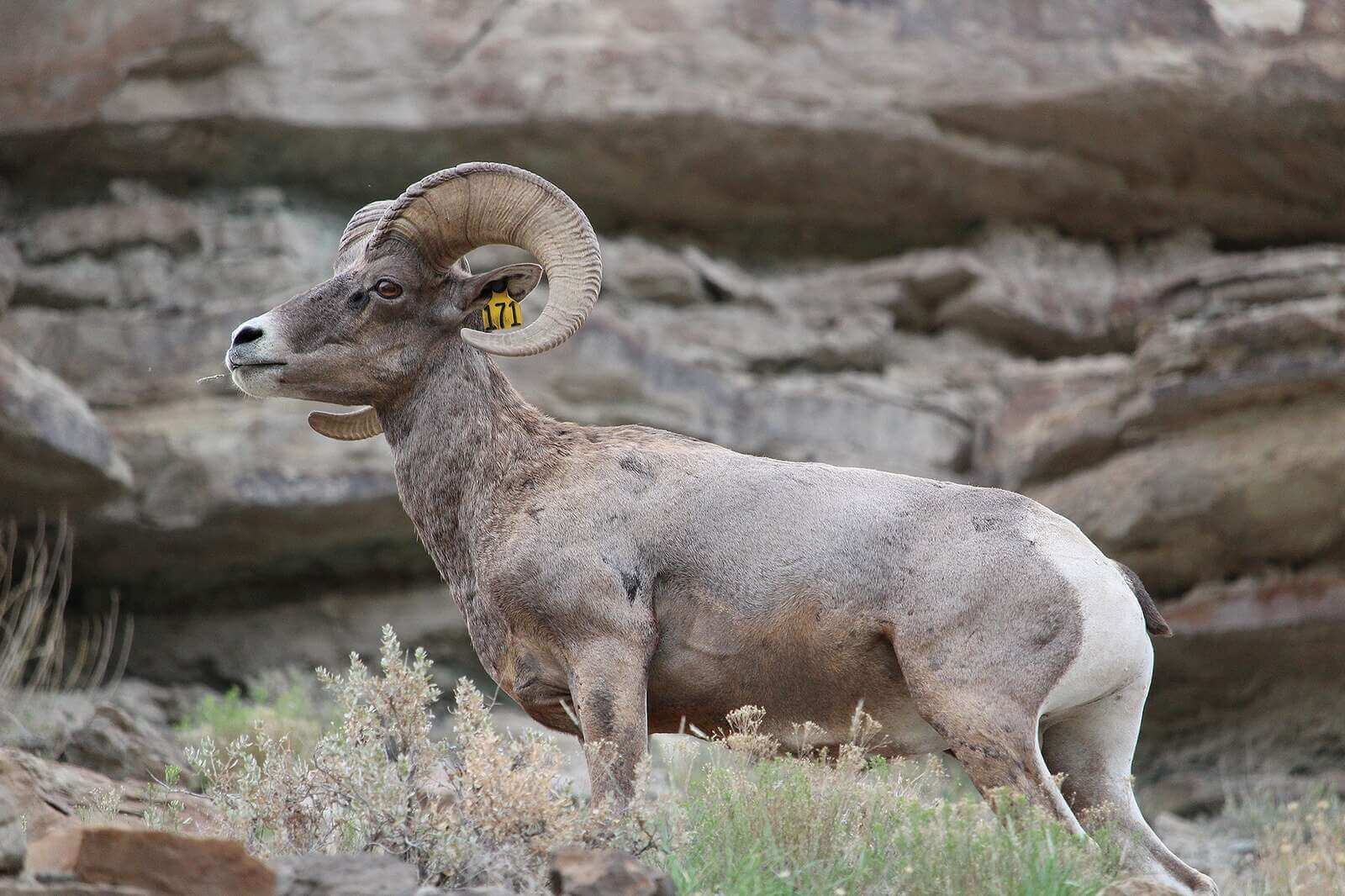 National Park Service lands are administered from the top down by skilled and efficient park superintendents. National Conservation Lands are managed by BLM staff members and advocated from the bottom up, by partners such as Friends of Cedar Mesa and Utah Dine Bikeyah for Bears Ears National Monument. Instead of fancy hotels, lodges and visitor centers in national parks, National Conservation Lands use small towns as gateway communities. Local groups promote landscapes that they love.

The BLM’s Conservation Lands have now grown to more than 37 million acres, including 6,000 miles of National Scenic and Historic Trails, 2,700 miles of Wild and Scenic Rivers, 24 National Conservation Areas, 28 national monuments and almost 27 million acres of wilderness and wilderness study areas. To aid the BLM, the Conservation Lands Foundation, with 80 partners in its Friends Grassroots Network, does its valuable advising right here, with 10 staff members in Durango at 835 East Second Ave., Suite 314. But why here?

“Durango’s location in the Four Corners made it the obvious choice for an organization that works in partnership to protect the cultural heritage, wildlife habitat and access for all people to the country’s rich public lands,” said Brian Sybert, executive director.

“We view the Four Corners as the beating heart of the West,” said Deputy Director John Wallin. “The number of tribal and pueblo communities and the cultural and natural heritage of the region are unlike any other in the West. With an airport and many of our priority landscapes within a day’s drive, our staff can be on the ground in many of the communities in which we work.”

The foundation’s Friends Grassroots Network drives change “in the way our public lands are managed, respected and perceived,” Wallin said. 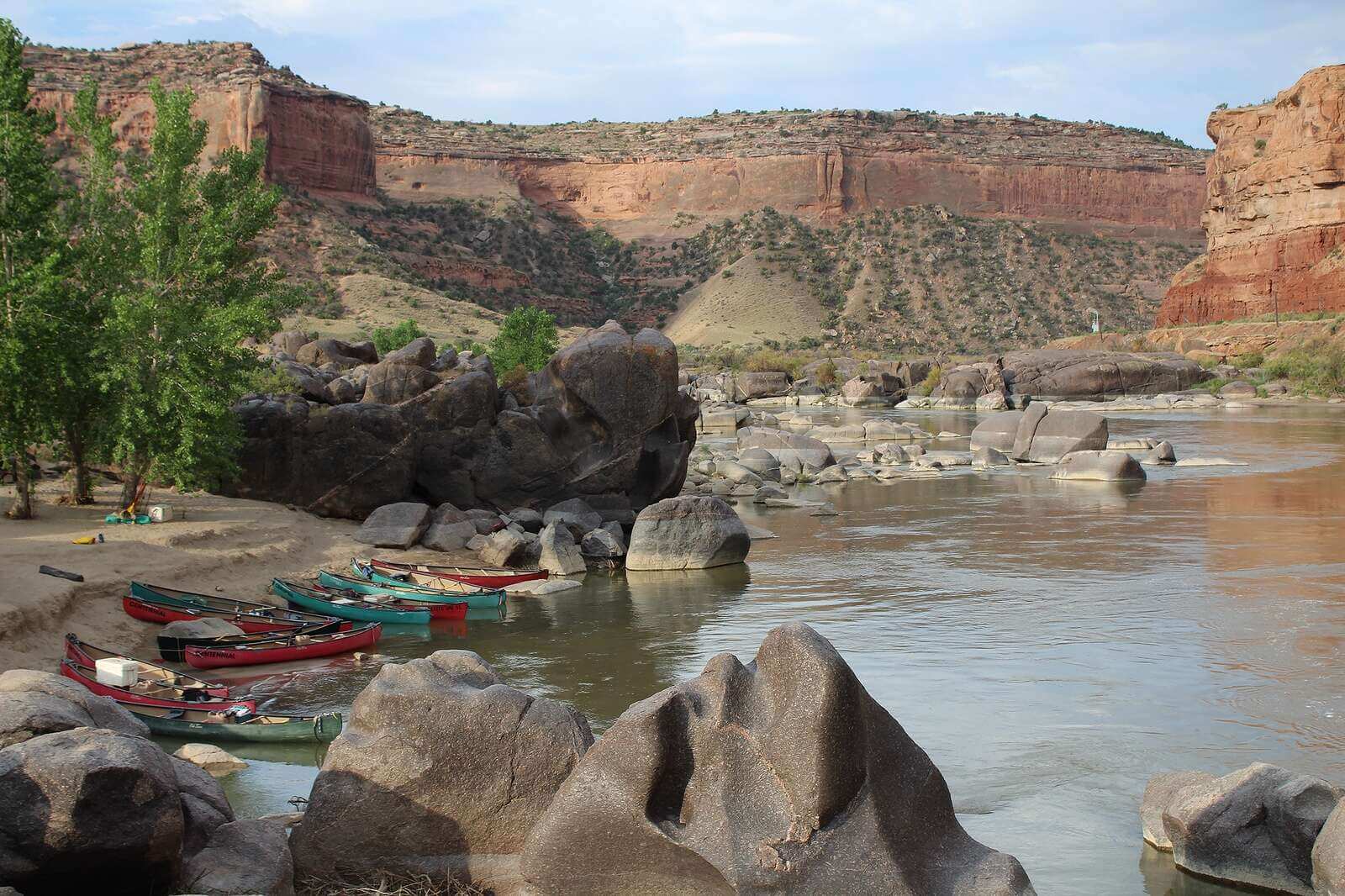 Ruby-Horsethief Canyons within McInnis Canyons National Conservation Area include a 25 mile canoeing stretch along the Colorado River with green water, red rocks, blue skies and, at a place called Black Rocks, lively swimming holes carved by erosion into the Vishnu schist which is 1.76 billion years old. Bureau of Land Management river rangers patrol this stretch of the Colorado where canoe parties camp.
Courtesy of Andrew Gulliford.

Secretary Babbitt had eloquently called for the BLM to enlarge its mission and to move beyond just supporting extractive industries of grazing, logging and mining. The Conservation Lands Foundation seeks to foster that change by encouraging grassroots groups “and making substantial, long-term investments to develop leaders within local communities,” Sybert said. As the post-COVID-19 recreation boom roars across the West, local groups provide guidance and a changed perspective both for land management and landscape interpretation.

There are 66 National Conservation Land units in Colorado, including two national monuments, Browns Canyon and Canyons of the Ancients; three NCAs such as Dominguez-Escalante, Gunnison Gorge and McInnis Canyons, all on the Western Slope; and five wilderness areas.

One of the Four Corners friends groups is Dolores River Boating Advocates, which is “a conservation group with a boating habit,” said Executive Director Amber Clark. Their work includes youth programming, getting kids out on the water to learn about riparian areas, and working toward a Dolores River Corridor NCA below McPhee Reservoir. 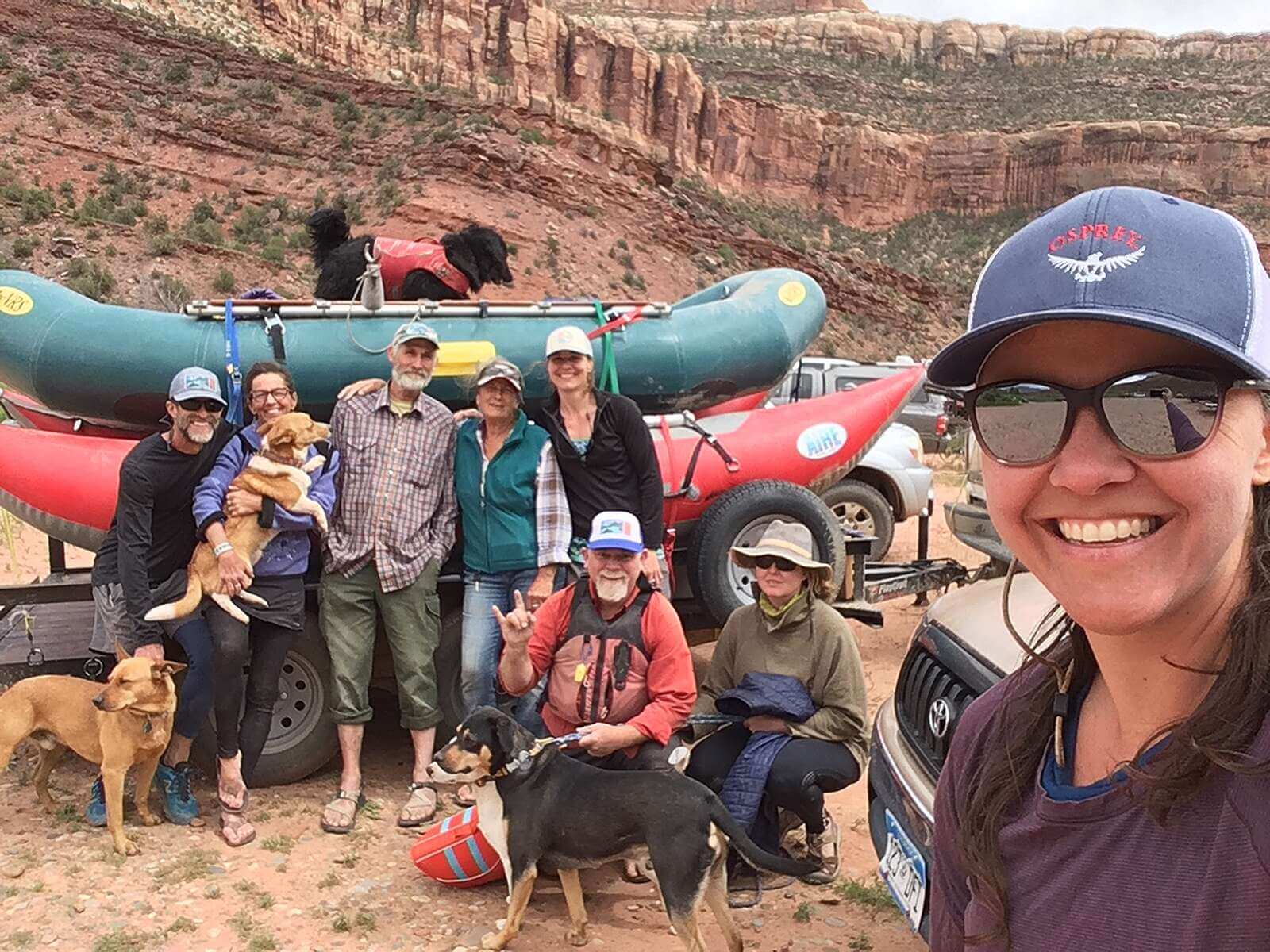 “Conservation Lands Foundation helped DRBA get our footing,” Clark said. “Through our involvement with the Friends Grassroots Network, we have been invited to numerous trainings and conferences that have helped us develop our board and staff leadership skills, strategic plans, fundraising plans and policies.”

Similar groups include Friends of Browns Canyon and Friends of the Yampa. Conservation from the bottom up. Locals know the landscape, and they have the energy and enthusiasm to protect their special places.

Another prime example is the Southwest Colorado Canyons Alliance, which supports Canyons of the Ancients National Monument. Canyons of the Ancients is three times the size of Mesa Verde National Park. Public use of the area “is experiencing unprecedented levels of visitation,” said SCCA Executive Director Shaine Gans. With help from the Conservation Lands Foundation, her friends’ group is facilitating new programs “to alleviate the pressure on our precious public lands.”

“While federal staffing and allocation of funds remain limited, SCCA’s programs are critical to providing the necessary services for visitors,” she said. It’s not just saving landscapes, it’s also about interpreting them.

“The common narrative around U.S. history and our public lands is a sanitized version that leaves out slavery, genocide and theft of tribal lands,” said Wallin with the Conservation Lands Foundation. “We believe that investments of time, money and technical support to Indigenous and community leaders is the single greatest catalyst for change in how our public lands are managed and how they reflect accurately our national story.”

So welcome to the Bureau of Land Management’s National Conservation Lands and its dedicated partners. There are great landscapes of the American West to explore. Move over, national parks. There’s a new public lands paradigm on the ground and in the Department of the Interior.

Andrew Gulliford, an award-winning author and editor, is professor of history at Fort Lewis College. Reach him at [email protected]. 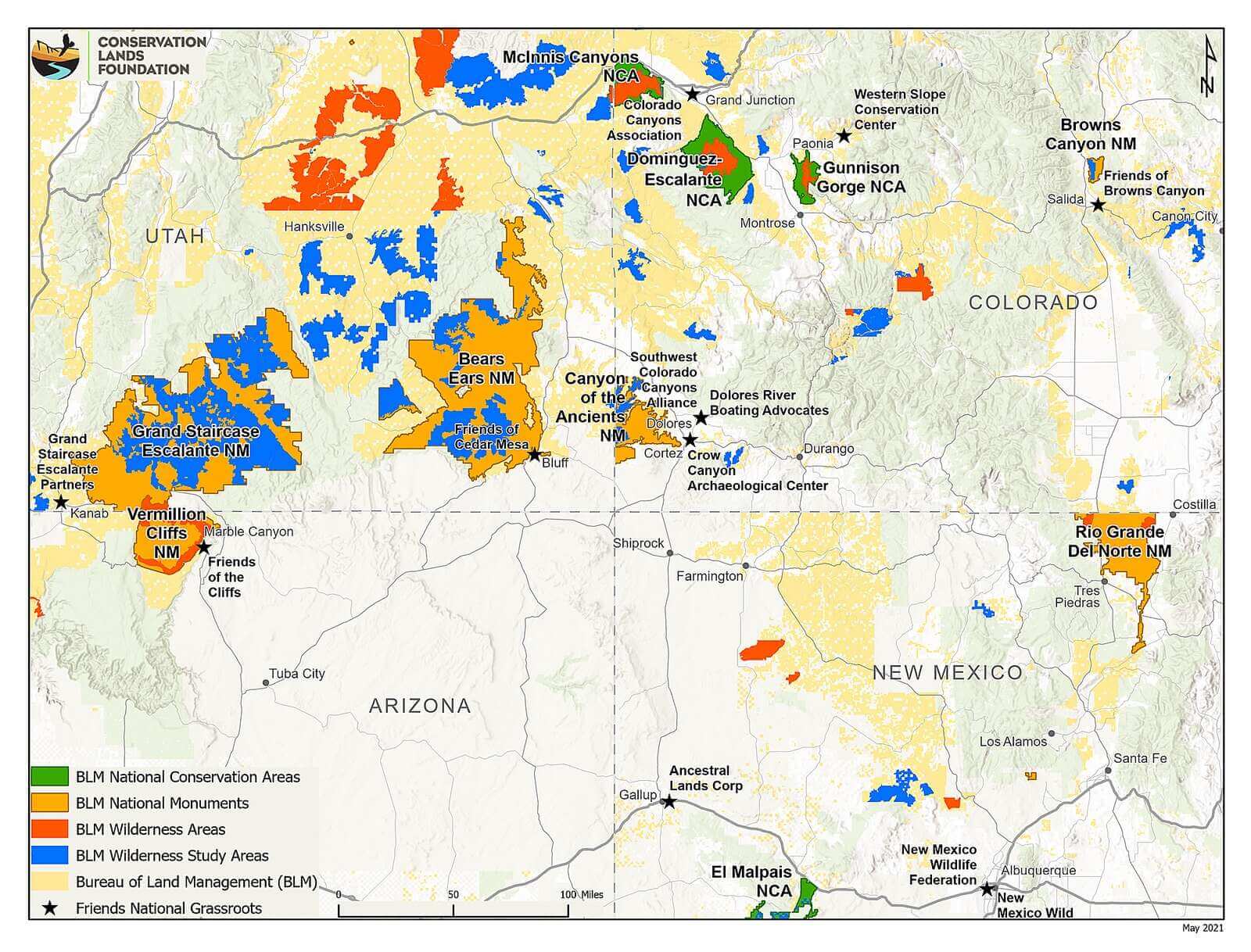 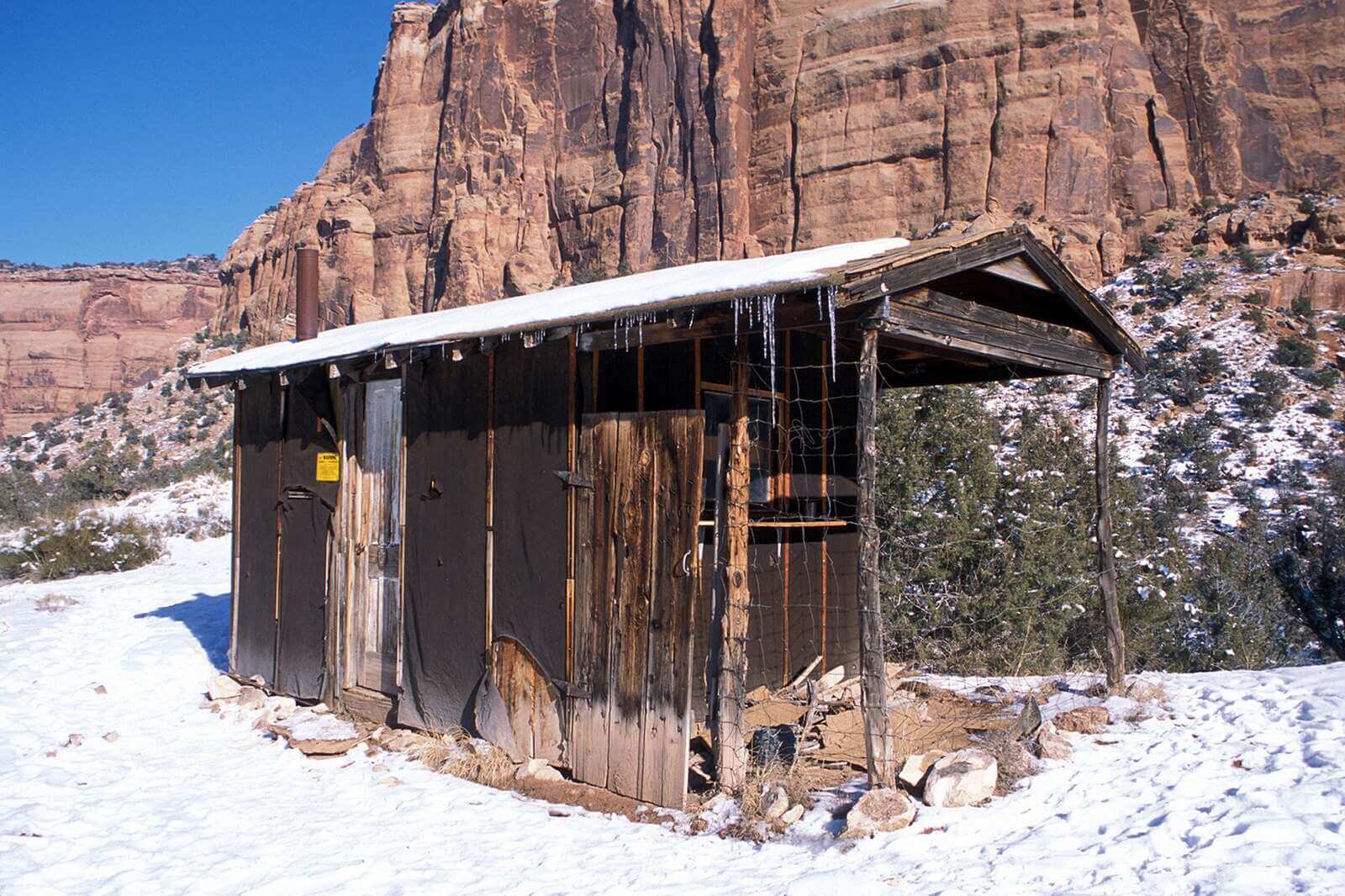 Black Ridge Canyons within McInnis Canyons National Conservation Area includes this herder line camp, which could have been for cowboys but probably was for herders before World War II tending Angora goats with their mohair wool.
Courtesy of Andrew Gulliford. 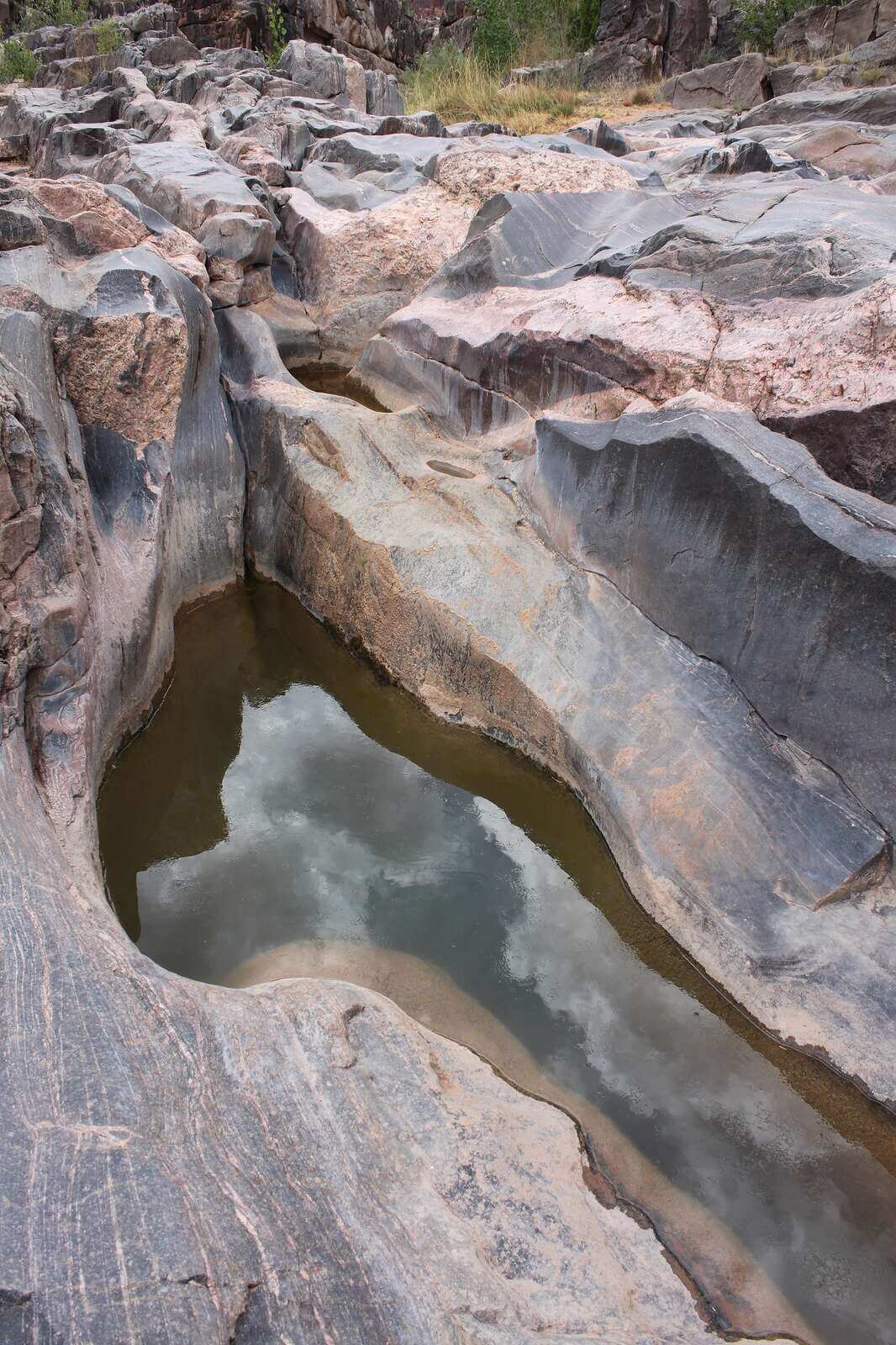 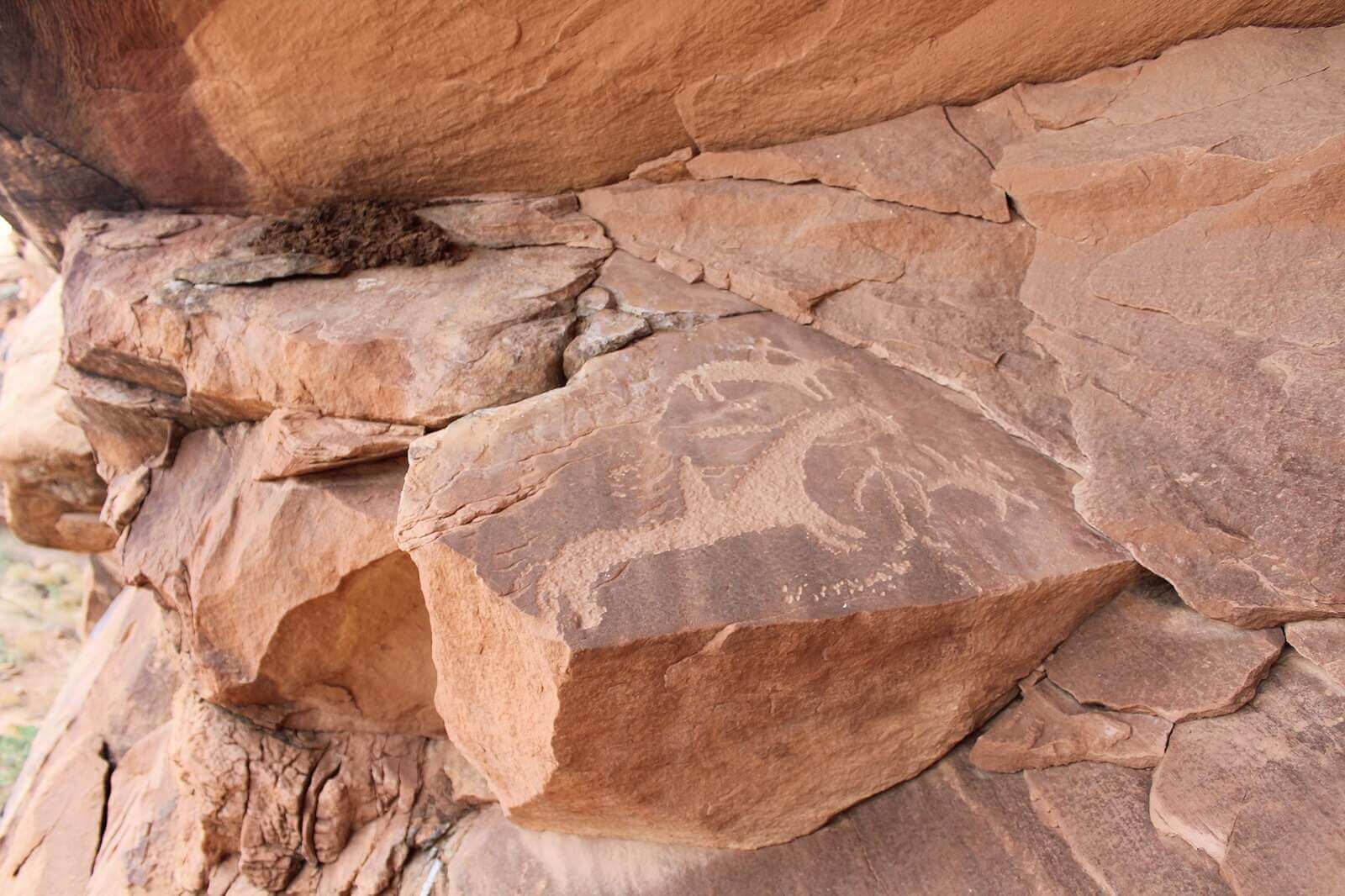 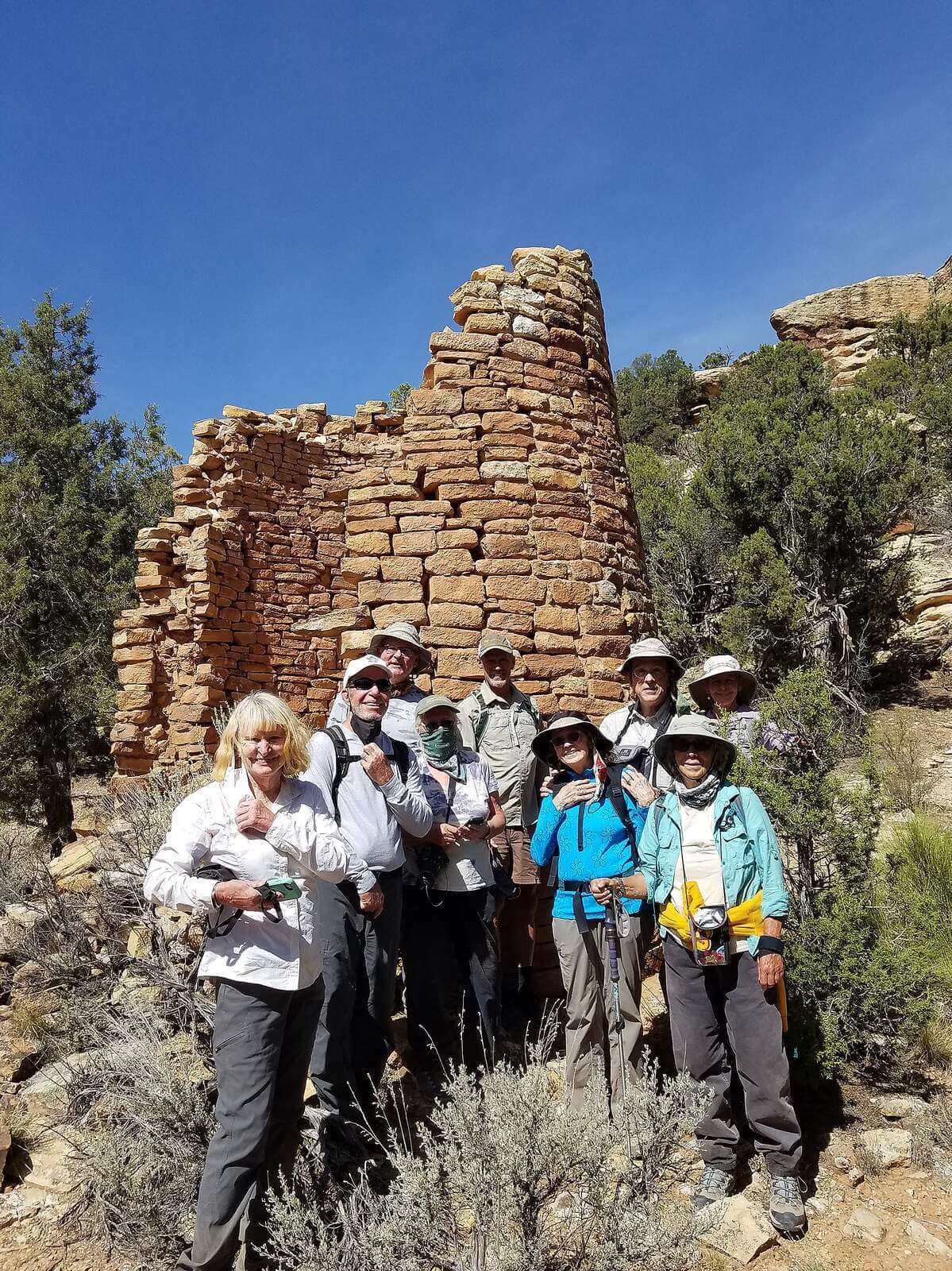 Regular news updates from the newsroom of The Durango Herald, an award-winning, family-owned newspaper in Southwest Colorado.