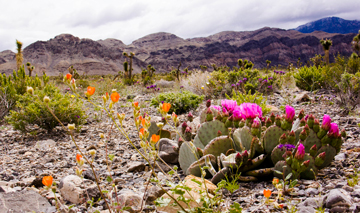 About the Desert National Wildlife Refuge

The Desert National Wildlife Refuge, on the northern boundary of the Las Vegas Valley, is the largest in the lower 48 states. President Franklin Roosevelt established the 2.25 million acre Desert Game Range (now the Refuge) in 1936 to provide habitat for wildlife species, particularly the desert bighorn sheep. In 1974, as part of a Wilderness review required by the Wilderness Act of 1964, 1.4 million acres of the Refuge were proposed as Wilderness by the U.S. Fish and Wildlife Service. These acres have been managed as Wilderness since that time. The Act would grant permanent Wilderness designation on 1.32 million acres. In the 1940's, the military gained joint administration with the U.S. Fish and Wildlife Service of the western half of the Refuge.