7 reasons why any adventurer should want to protect, appreciate and experience this wild (and contested) Southeast Utah national monument. By Cyrus Norcross.

The original article was posted on publiclands.com. To read the original blog click here.

As pandemic travel restrictions ease, outdoor explorers, scientists and Native Americans are all visiting Bears Ears National Monument much more frequently. The reasons for the visitation uptick start with world-class recreation opportunities that abound: from hiking, camping, fishing and hunting, to whitewater rafting and paddling. But that’s only the start, as the cultural draws stack up quickly: over 100,000 archaeological and fossilized dinosaur sites to survey; endless wildlife to observe, including 18 animals on the endangered species list; plus a wealth of plants to study, used medicinally for centuries by Native American tribes.

It might seem obvious to preserve and protect an area that five of those tribes declare sacred. However, Bears Ears has been nothing but controversial due to its “low to moderate energy and mineral development potential,” notably for uranium/vanadium. Eleven months after President Barack Obama’s 2016 designation of Bears Ears as a national monument, President Donald Trump reduced it by 85 percent—despite the surveyed area’s total lack of coal, minimal renewable energy resources, and low potential (to only moderate in two small areas) for oil and gas. The reduction triggered concerns for archaeological sites being looted, new roads and mining sites disrupting the ecosystem, all with unintentional consequences on the area’s biodiversity.

The Bears Ears Inter-Tribal Coalition (BEITC) responded. Founded in 2015 by five tribes—Navajo, Hopi, Ute Mountain Tribe, Ute Tribe and Zuni—the BEITC has worked tirelessly to preserve Bears Ears. In October 2021, as a testament to its efforts, President Joe Biden redesignated the monument’s initial boundary of 1.3 million acres and added 11,200 acres. And though the original boundaries were reinstated, the work is far from over. Beyond continuing land protection and advocacy efforts, the BEITC strives to educate all on the lasting benefits of a preserved Bears Ears.

On a recent trip with the Public Lands Fund* and the Conservation Lands Foundation (CLF), the BEITC provided a critical spotlight of what all is at stake for this one-of-a-kind monument worth any adventurer’s attention and respectful appreciation. On a personal level, as a lifelong resident of the bordering Navajo Nation, I can attest to having overlooked this rich area. Over three full days, I enjoyed all that Bears Ears has to offer with people who laid eyes on the landscape for the first time. I took away seven reasons why this wild, protected and public land in Southeast Utah matters now more than ever.

Anyone who loves playing outdoors will feel Bears Ears breathing, whether it’s on a hike, hunt, or on the river with paddle or rod in hand. Hikers have a rare opportunity to walk through prehistoric cliff dwellings, gaze up at rock art or down at ancient dinosaur footprints. The friendly and staggeringly scenic San Juan River welcomes all paddlers (perfect for rafts, kayaks, SUPs and canoes alike) wanting to experience the sound of splashes echo off limestone walls or the sight of a great blue heron swallowing a fish whole. Bears Ears campers see the same enveloping night sky as the area’s original Ancestral Puebloan inhabitants. Anglers can trace the San Juan for a chance to nab a legendary channel catfish while hunters have nearly year-round options to harvest black bears, cougars, mule deer, wild turkey and bighorn sheep. As we floated through the stunning geology of the river canyons, I reveled in moments on shore, being swallowed in the mud, seeing wild burros traipse by in their natural habitat: I couldn’t help but think how future generations deserve these unequaled experiences.

About those 100,000 archaeological sites: They date back 14,000 years. Beyond their sacred status among the five tribes, they present a rich resource for anthropologists. The Upper Sand Island Petroglyph Panel features a mammoth rendering that dates to the Paleoindian Period, 9,000 to 13,000 years ago, debated by scientists as the oldest rock art in America. Just off the San Juan River, paddlers and hikers can soak in the Big Kachina Panel petroglyphs that date back to 1000 years old. Just downriver from the long panel, you can tread lightly into multiple rooms of the Ancestral Puebloan dwelling named the River House, dating back to the 1200s though preserved and stabilized to prevent further structural erosion. Walking through Bears Ears, one can encounter remains of old hogans (traditional Navajo home), sweat lodges, and tipi poles. To untrained eyes, these piles of logs may look like firewood. To an expert, there’s a hidden story; this is the value of a good guide.

During one of our hikes, our guide stopped to flip over a rock, revealing a corn grinding stone. After informing us of its cultural significance, he flipped it back over, its ordinary-looking nature perhaps preventing it from being stolen, though laws are still the biggest deterrent. CLF’s partners on ground here let me know that since the reinstatement of the monument boundaries, once-common cases of looting and destroying archaeological sites have decreased significantly. And the sites add up, mesa tops expose evidence of villages, shrines, and ancient roads—all within the borders of Bears Ear and therefore now protected by law. 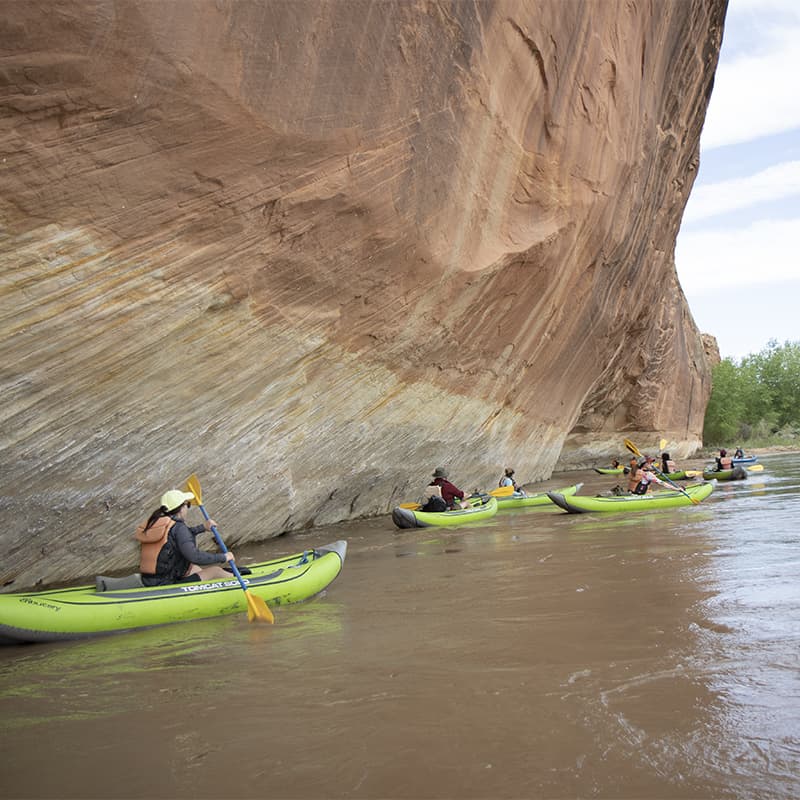 Paleontologists have unearthed bones here that date back 250 million years. Among these fossils were megafauna teeth, dinosaur footprints, plus evidence of plants and shells. One discovery was the large deposit of fossilized bones from a Phytosaur—a crocodile-like, 20-foot-long reptile with armored skin and blowhole nostrils. “The site is enormous,” paleontologist Rob Gay says of the rare deposit that’s over 200 feet long, making it “the largest Triassic bone bed in the state of Utah and possibly one of the densest in the country, if not the world.” Explore the monument long enough and you’re likely to stumble across unrecorded dinosaur tracks. Like the archaeological sites within the monument borders, fossils are protected from looting by law, which gives paleontologists and curious visitors alike a unique view into the past.

As home to 18 endangered species, there are a few winged standouts—the California condor, the Mexican spotted owl and the southwestern willow flycatcher in particular—that you need your camera ready to photograph. (I learned that lesson upon spotting the large 9-foot wingspan of a California condor flying over our raft). Protected under the Endangered Species Act (ESA), the birds are vital to the biodiversity of Bears Ears, though this isn’t just a vibrant flyway. Besides endangered animals, Bears Ears provides habitat to (as President Biden’s proclamation states), other threatened, “sensitive, endemic, or otherwise rare species of wildlife, fish, and plants.” That means black bears, cougars, mule deer, coyotes, gray fox, skunk, jackrabbit, spotted bat, and many more. Credit that diversity to a landscape it describes as “one of the most ecologically intact and least-roaded regions in the contiguous United States,” despite millennia of human habitation.

The BEITC considers Bears Ears not only a sacred home of their ancestors, but also a vital source for gathering herbs, hunting game and conducting ceremonies. The Hopi and Zuni descendants of the Ancestral Puebloans send their youth to help stabilize the ancient structures. Accompanied by elders, they hear stories about their ancestors migration to the area, interpret the rock art and cultivate the area’s 31 plants known for medicinal purposes among all five tribes (including the Four Corners potato, goosefoot, wolfberry and sumac). These plants have also been discovered at archaeological sites, indicating that Ancestral Puebloans used them for sustenance and possibly trade. Additionally, the Ute people have traditionally hunted and grazed their livestock near Bears Ears for years, and many of the tribes gather ceremony items that can only be harvested there. “For Indigenous communities, we are always thinking about our children's children's children,” says the Utah Diné Bikéyah’s (UDB) Cultural Resource Coordinator Angelo Baca (Diné/Hopi) of the coalition’s long perspective, “It’s a different approach from Western thinking when it comes to heritage and preserving it for future generations.” 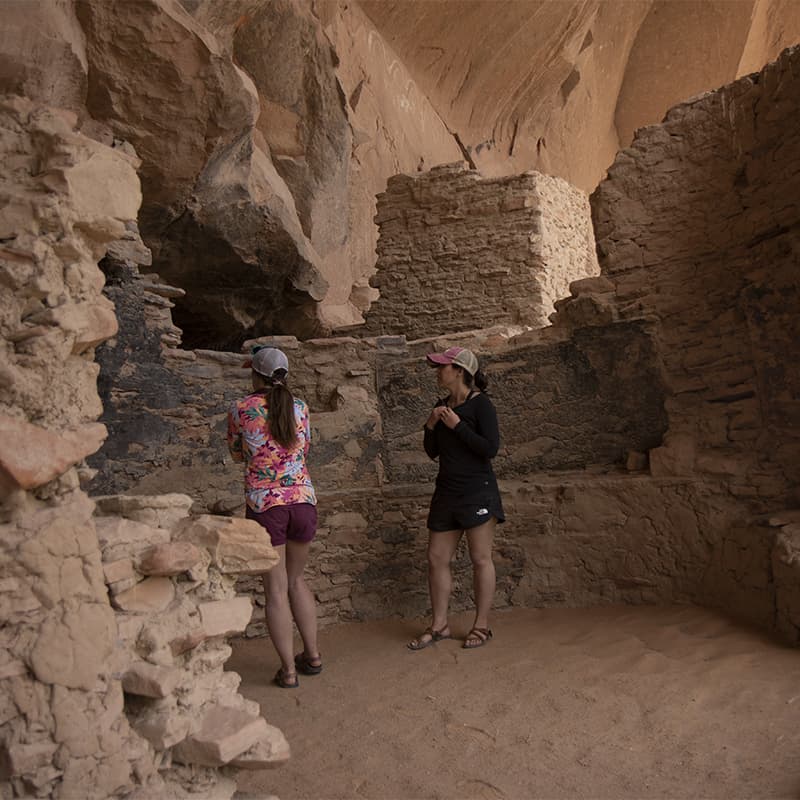 Bears Ears is the first national monument that was proposed by a coalition of Indigenous tribes. Since the removal of their homelands, Native Americans have watched their ancestral lands desecrated and destroyed. The formation of BEITC not only exhibited the will power of an organized collective, but also demonstrated each tribe’s spiritual connection to the land. As the BEITC spearheaded the movement to establish the monument with UDB’s foundational Indigenous community grassroots work, other nonprofits joined the fight, with a notable contribution from the CLF. The grassroots community-based organization advocates to protect, restore and expand national conservation lands utilizing the Friends Grassroots Network, which unites nearly 80 local interest groups across the U.S. Locally, CLF network member Friends of Cedar Mesa has been instrumental in protecting Bears Ears, working alongside CLF and BEITC to build the Bears Ears Education Center. Based in Bluff, Utah, this visitor’s resource teaches the cultural significance of Bears Ears and how to experience it respectfully.

The trip alongside CLF gave me hope that this collaborative, community-driven approach can work. We’d keep making stops—taking photos of a cactus, picking up rocks, staring into the landscape—and, at first, I found it odd. But when a young lady in our group started crying as we snaked through the canyons of the San Juan River, I asked if she was all right. “I’m OK,” she said, “I just have never seen anything so beautiful in my life.” Her sincerity surprised me. As a local resident, I’d neglected the beauty of my homeland and looked past small details these visitors noticed right away. Looking through the eyes of someone who takes nothing for granted helped rekindle a sense of wonderment and a desire to know more. Those details from the added perspectives of a diverse group make all the difference.

As BEITC continues working with federal agencies, it continues providing a valuable model for the co-management of public lands—one that works for and with its traditional stewards. Tribal governments will be able to reduce conflict involving cultural artifacts, plus provide traditional ecological knowledge about resource management and, through tribal stewardship, land conservation. I felt confidence in this approach after hearing genuine pride from Ida Yellowman (Diné), Baca’s mother and a Navajo elder, in speaking to this joint effort between conservation groups to create the monument, and the shared ongoing work to manage and protect it.

From Bears Ears, the federal government has a unique opportunity to start implementing co-management with other tribes across America. By allowing tribes to lead the way in conservation and land stewardship, big bureaucracy has a real chance to enact positive change with its land management policies. Bears Ears matters because allowing the land’s original inhabitants to protect and conserve it is the best way to help future generations understand and share it for all to enjoy.

All articles are for general informational purposes. Each individual’s needs, preferences, goals and abilities may vary. Be sure to obtain all appropriate training, expert supervision and/or medical advice before engaging in strenuous or potentially hazardous activity.