Durango, Colo., (January 24, 2017) – The Conservation Lands Foundation, in partnership with Puente Institute and Grand Staircase-Escalante Partners, today announced the launch of TerraTruth, an app that will allow any public lands user to submit data and photos—just “Explore, Snap, Send”—documenting damage or other harms occurring on protected public lands managed by the Bureau of Land Management (BLM). These lands are collectively known as the National Conservation Lands, and include the two national monuments—Bears Ears and Grand Staircase Escalante—currently under attack by the Trump administration. 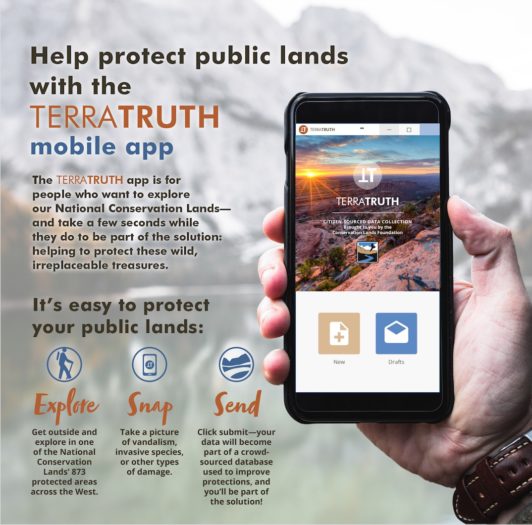 The app uses Esri as its base platform—the gold standard in mapping technology and parent platform of such well-known products as ArcGIS—and is now available for free download on both iOS (App Store) and Android (Google Play) phones.

“In the last year Americans have stood up in a big way against this administration’s unprecedented and illegal attacks on public lands, with millions of people submitting comments or donating money to support their public lands,” said Brian Sybert, executive director of the Conservation Lands Foundation. “The TerraTruth app gives outdoor enthusiasts a direct way to protect these places. The data can be used to identify threats to these places, through better management policies, targeted restoration efforts, or even in court,” he said. Sybert added, “It offers outdoor enthusiasts a hands-on way to make sure these lands are there for our grandchildren.”

On December 4th, 2017, Trump signed two proclamations eliminating millions of acres of protection from Bears Ears and Grand Staircase-Escalante National Monuments. The president’s action was the largest rollback of protections for public lands in our nation’s history. The legality of the president’s actions is being challenged in court, but the future protective status of the National Monuments remains uncertain.

“We can no longer assume that the wonderful legacy of public land will survive on its own. This app provides people with the tools to monitor and share the wonder of our public lands and to note misuse or abuse of our national treasures,” said Nicole Croft, executive director of Grand Staircase-Escalante Partners. “Over the last four months, we’ve been testing the prototype in the Grand Staircase-Escalante National Monument, and we believe this could help shift the paradigm of how people engage with public land, and usher in a new era of stewardship.”

The app was developed in partnership with the Puente Institute, a non-profit that fosters conservation and humanitarian research through science-based geospatial technologies, education and consulting services.

“Puente Institute is dedicated to the ethos of Art, Spirit and Science, and this tool is a bullseye of our mission—incorporating all three,” said Chris Mathias, founder of the Puente Institute. “This project with Conservation Lands Foundation and Grand Staircase-Escalante Partners has been a labor of agility, precision and authentic care. Allowing outdoor enthusiasts to contribute to this data crucible promises to chart the future of public lands in a way not possible a few short years ago.”