Thank you for joining us for a special virtual screening and conversation of Patagonia’s new film PUBLIC TRUST. This special, two-part community event allows you to watch PUBLIC TRUST on your schedule and join us on Tuesday, September 29th for our online discussion with the filmmakers and local advocates.

PUBLIC TRUST explores how our public lands are facing unprecedented threats from extractive industries and the politicians in their pockets. Part love letter, part political exposé, the film investigates how we arrived at this precarious moment through the examination of beloved public lands that are particularly at risk, from  Bears Ears National Monument in Utah, to the Arctic National Wildlife Refuge—and makes a case for their continued protection. Watch the PUBLIC TRUST trailer HERE. 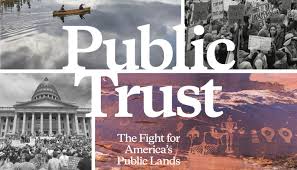 The Conservation Lands Foundation's exclusive PUBLIC TRUST screening room will be open starting at 7am ET on 9/26, and it will close at 11:30pm ET on 9/29. You have three days to watch when it fits into your schedule.

David Garrett Byars is the Director of Public Trust. David made his directorial debut at the 2017 Tribeca Film Festival with No Man’s Land, a documentary about the 2016 militia occupation of the Malheur National Wildlife Refuge that sparked international headlines. Byars also produced and lensed Massacre River, Suzan Beraza’s film about statelessness in the Dominican Republic.

Jeremy Hunter Rubingh is the producer of Public Trust. He has worked for the last decade at the nexus of politics and conservation in the West for foundations and strategic think-tanks where he developed messaging, media strategy, diverse voice engagement and innovative tactics on a variety of public land and clean energy issues. He has also worked in film as an executive producer with the Story Group on the short film, Unacceptable Risk: Firefighters on the Frontlines of Climate Change, and as director and producer on several other short projects, including an award-winning short film focused on backcountry skiing and 1872 mining law reform in a small Colorado community. Jeremy currently lives on a small sailboat in Seattle where he feels lucky to connect with Puget Sound, old growth forests, and the incredible mountains and volcanoes of the Cascades.

Angelo Baca is a Native American filmmaker, Navajo and Hopi and a Trustee of the Conservation Lands Foundation. A graduate of Native Voices Program at the University of Washington, he has done numerous documentaries and collaborative works with other filmmakers. His first interactions with Food Sovereignty have been with Pacific Northwest Coastal tribes who introduced him to a rich variety of culturally and nutritionally amazing foods with traditional foods specialists and teachers. Recently, he taught at Brown University both Native American Literature and Native American Media/Film courses. His research interests vary from indigenous food sovereignty and Native American health and wellness to indigenous film and cinema to native youth development projects, including indigenous international repatriation.

Jody Potts is Han Gwich’in, an enrolled tribal member of the Native Village of Eagle, and a Doyon shareholder. Jody is Regional Director of Native Movement and served as one of the first female Sergeant Village Public Safety Officers and as the director of public safety at Tanana Chiefs Conference for many years. Jody is a traditional tattoo artist, an Ironman triathlete, and a dog musher. Jody lives in Fairbanks with her three children.

Siqiniq Maupin is the North Slope Community Organizer for Native Movement and Sovereign Inupiat for a Living Arctic (SILA), a Fairbanks, Alaska-based nonprofit activism group Siqiniq is Iñupiaq, Italian, and Irish. She is from Nuiqsut and Utqiagvik and grew up in Fairbanks and Anchorage. She is currently a senior at the University of Fairbanks Alaska in Alaska Natives Studies learning Iñupiatun. She has two children, Ukpik and Iñukuyuk, ages three and six. She loves to do art projects and learn about her language and traditions.

RSVP below for access to our screening room and zoom link for the community conversation.