The original opinion piece was posted in the New York Times by Alex Schechter. To read the original piece click here. Less than two hours from Las Vegas, the sacred creation site for Yuman-speaking Native Americans may soon become a national monument. It’s been a long time coming.

On a clear Saturday in November, I drove an hour south from my apartment in Las Vegas to reach the Joshua Tree Highway, a 10-mile corridor that cuts through the largest Joshua tree forest in the world. The ancient, tentacled trees were a bizarre sight, but my eye kept wandering toward the horizon where a peak known as Avi Kwa Ame, or Spirit Mountain, looms high over the Piute-Eldorado Valley in southern Nevada. It was midafternoon and in the distance the rock’s light crystalline granite radiated a rosy glow. Its presence was unmistakable.

Laced with desolate canyons, Avi Kwa Ame is the mythical creation site for Yuman-speaking tribes like the Fort Mojave, Cocopah, Quechan‌‌ and Hopi. Their stories place it at the center of the universe. Soon, it may become a national monument.

On that November day, lush plumes of grass separated the squiggly Joshua trees, an unusual sight in such a hot, dry climate. In summer, temperatures in the Mojave Desert regularly soar above 100 degrees, but by late fall, it becomes a refreshing, if stark, haven.

Before my trip, I’d spoken to Alan O’Neill, the former superintendent of Lake Mead National Recreation Area, who told me, “This landscape talks to you when you get close to it.” The giant boulders stuck out like warts among the prickly barrel cactuses and the sun-haloed cholla plants. It was hard to believe Las Vegas was just an hour up the road.

The 500 miles of backcountry roads that encircle Avi Kwa Ame are mostly old transmission line maintenance routes, accessible to anyone with a four-wheel-drive vehicle. If you were to camp here (which the area’s overseer, the Bureau of Land Management, allows), you would have entire canyons to yourself. You would also get a sense of why Indigenous groups have fought for decades to safeguard this area.

Conservation efforts began in 1999, when a 33,000-acre portion of Avi Kwa Ame was listed on the National Register of Historical Places. (In that application, tribal elders referred to the mountain as “the place where shamans dream.”) Large swaths of the desert were later classified as Areas of Critical Environmental Concern to protect the endangered desert tortoise. While these were important steps, they failed to account for the cultural worth of the entire valley — not just the mountain itself. As one tribal leader told Mr. O’Neill in the late 1990s: “You can’t separate the two.”

Now it is hoped that a proposed 450,000-acre Avi Kwa Ame National Monument will connect this area to a wide corridor of parks and monuments that stretches from California all the way to the Colorado Plateau. Such protection would ensure the spiritual site is not tampered with and give travelers interested in Native American culture a new reason to venture beyond the Strip. 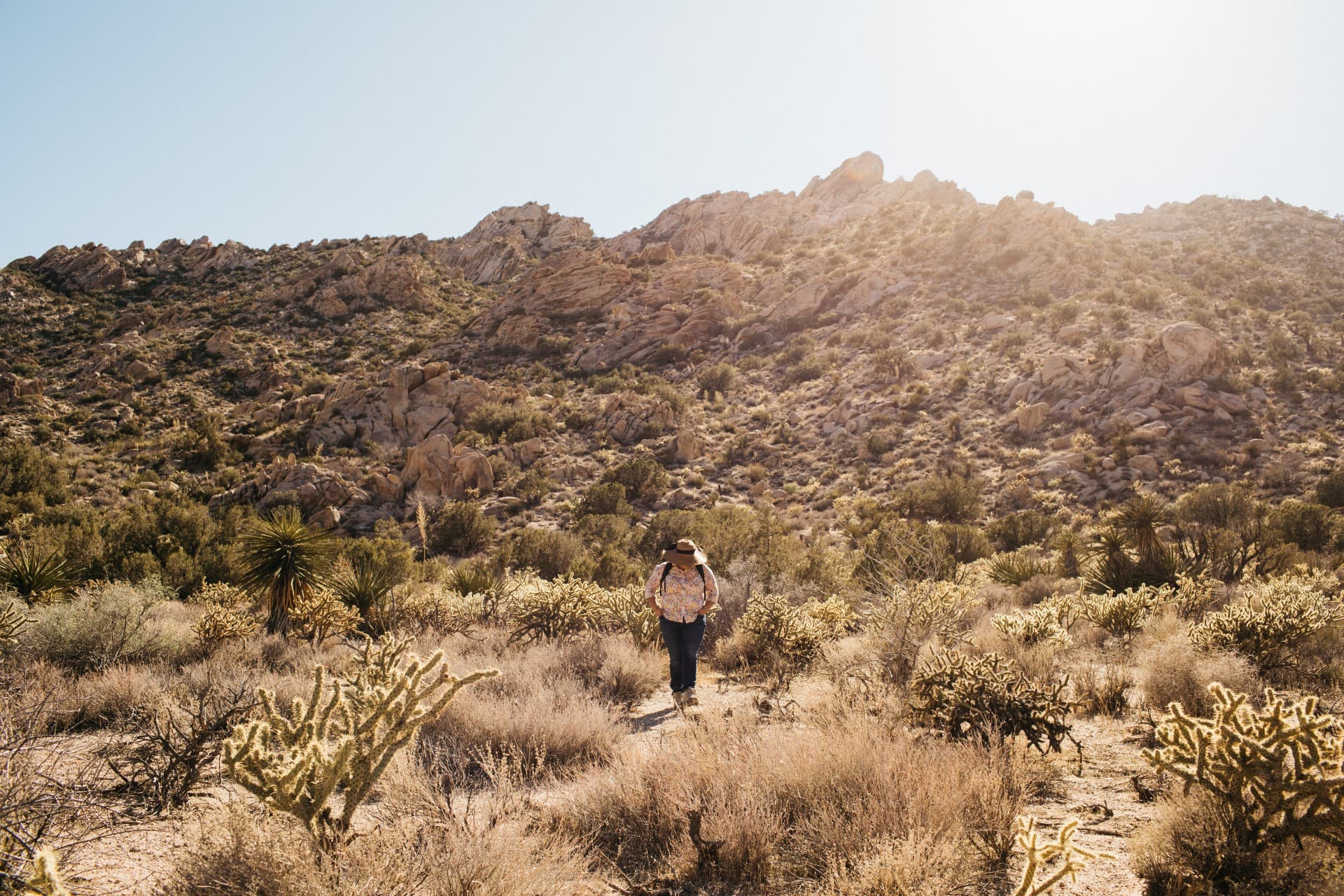 In California, the Mojave National Preserve covers a sweeping 1.6 million acres, but across the state line, the same desert in Nevada remains unprotected. This makes it appealing to energy companies, who have proposed large-scale wind and solar projects here and in other parts of the state (85 percent of Nevada is public land). Residents of nearby Searchlight, a rural community off Highway 95, have resisted such efforts, though until recently, they lacked a concrete plan to designate the area.

A turning point came in 2013, when Judy Bundorf, a Searchlight resident, sued the Bureau of Land Management, the U.S. Fish and Wildlife Service and the Department of the Interior to halt the construction of a 9,000-acre, 14-square-mile industrial wind energy project. Ms. Bundorf’s partially solar-powered home is nestled among spiky yucca and Joshua trees, and after moving to Searchlight in 2002 she became enamored with the area’s rich biodiversity. (The desert is home to more than 200 endemic plants.)

The lawsuit prompted residents to reach out to tribal members from the Fort Mojave and Chemehuevi reservations who had been disputing a separate development in nearby Ivanpah Valley. Even though the proposed wind farm in Searchlight wouldn’t have touched Spirit Mountain, Ms. Bundorf said the tribes “weren’t too pleased” about it, either. Together, with help from two nonprofit groups, the National Parks Conservation Association and the Conservation Lands Foundation, they decided to apply for national monument status.

In June 2021, the Searchlight town board unanimously voted to approve the proposal. (Similar resolutions passed in the neighboring towns of Laughlin and Boulder City.)

Ms. Titus had previously shepherded three national monuments (Gold Butte, Basin and Range and Tule Springs Fossil Beds) through Congress, and she saw that Avi Kwa Ame had broad bipartisan appeal in her district of Las Vegas. “People see this valley growing so fast, they want to save something so it doesn’t become another suburb,” she said.

In late November, at the White House’s annual Tribal Nations Summit, President Biden stated his support for protecting Avi Kwa Ame, though he has yet to declare its status as a national monument. Still, Ms. Titus, who was in the crowd that day, said she felt a surge of joy when she heard the news. “It was very gratifying,” she said.

‘A template for the future’

To date, Bears Ears National Monument in eastern Utah, has been the only national monument to explicitly address its Indigenous roots. (Today, the monument is co-managed by a council made up of delegates from five tribes.) Should Avi Kwa Ame become the next such designation, it would likely send a clear message to Indigenous communities, who have long fought for a meaningful say in the management of their ancestral lands.

“I really see this as a template for the future,” said Taylor Patterson, the executive director of Native Voters Alliance Nevada, a Las Vegas-based nonprofit that focuses on Indigenous issues. “Not often do we have outdoor recreation people working with tribes. It’s symbolic of what all land designation in the future should be like.”

The National Park Service, which hired its first Native American director in late 2021, has at times clashed with tribal nations. Ms. Patterson cited Death Valley National Park, which was established as a national monument in 1933 at the cost of evicting the area’s native inhabitants, the Timbisha Shoshone. “You have a history of essentially kicking people out of their landscape,” she said.

Designations like Avi Kwa Ame, she explained, could help travelers see that America’s beloved national parks and Indigenous sacred sites are essentially two sides of the same coin. “When we talk about visiting Grand Canyon, Death Valley or Yosemite — all of those spaces are sacred to tribal people.” 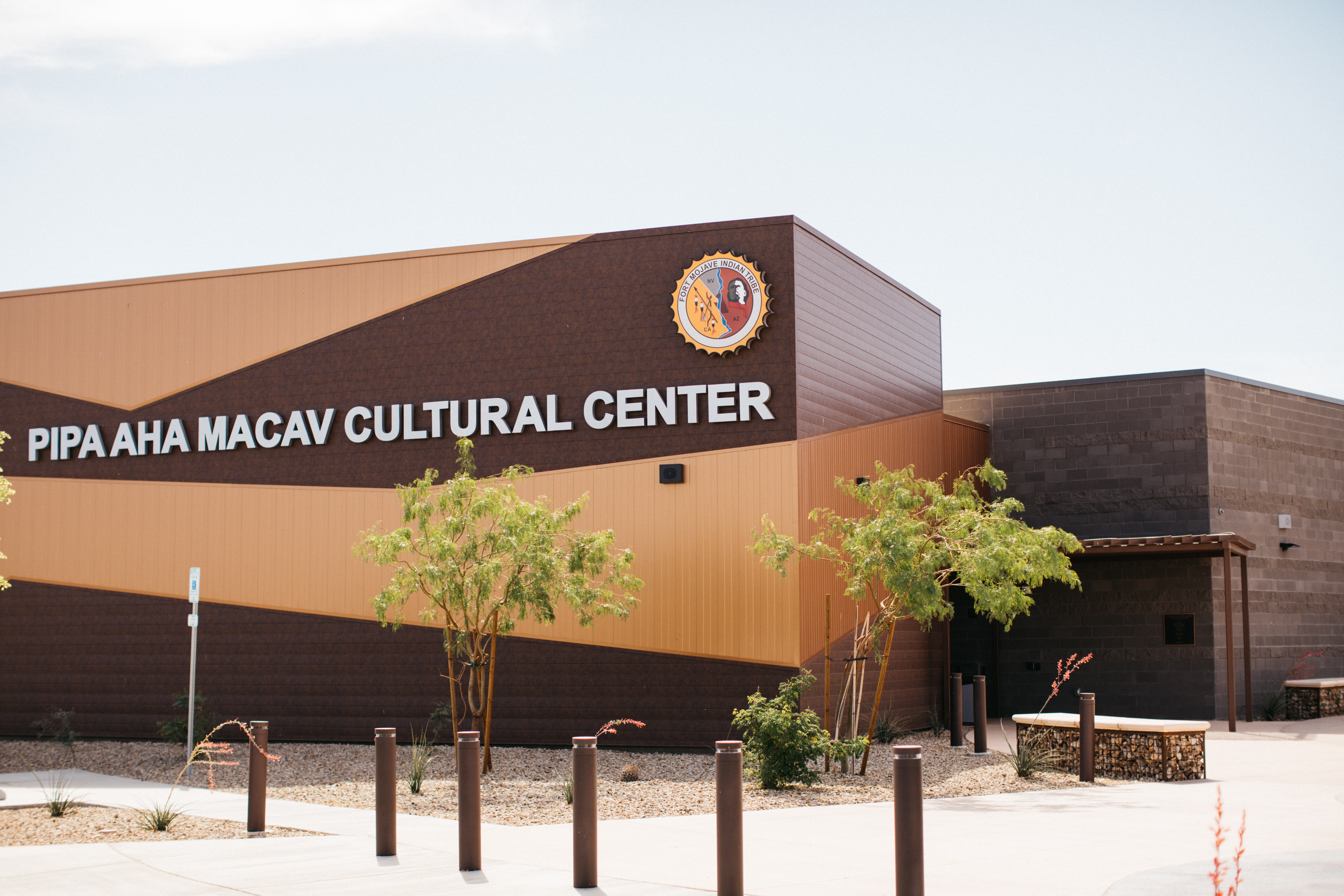 Earlier in the week, I had driven to Needles, Calif., to visit the Pipa Aha Macav Cultural Center (Pipa Aha Macav is the Fort Mojave term for “people by the river”). Driving south on Highway 95, I passed a sprawling solar project that eventually gave way to open desert. Creosote bushes, still green from the August monsoon, carpeted the valley. In the distance, I could make out the silhouette of the Highland Range, crowned with dark piñon and juniper forests.

Johnny Ray Hemmers, a tribal council member, met me in the center’s cultural classroom, where local youths learn traditional activities like painting, beading and dancing. Mr. Hemmers, 38, is a warm, quick-talking man with twinkling eyes. He spoke openly about his tribe’s long history in the desert and of the significance of Ave Kwa Ame. “As a child, seeing the mountain meant a lot to me,” he said. “When I looked at it, I knew who I was and where I came from.”

Avi Kwa Ame, for the Fort Mojaves, is not a recreational place. Each October, members take part in a 34-mile ceremonial run that begins at the base of the mountain and continues all the way to Needles, ending with a plunge in the icy Colorado River. The event honors traditional “spirit runners” who once ferried messages between tribes, similar to couriers in ancient Greece.

I also spoke to a member of the Moapa Band of Paiutes, a neighboring tribe, who do not count Avi Kwa Ame as their origin site, but still recognize its deep cultural relevance. “Our footprints are all throughout this area,” Shanan Anderson, the tribe’s cultural manager, told me.

The Fort Mojave tribe identifies itself as the mountain’s caretaker, and its members are no strangers to environmental justice. In 1998, they successfully fended off a proposed nuclear dump site in Ward Valley, 20 miles west of Needles, and in 2006 marked a legal victory against Pacific Gas & Electric, whose pipelines threatened to seep toxic chromium-6 into the Colorado River. They are confident that the campaign for Avi Kwa Ame will end in victory, too.

In June, Mr. Hemmers was part of a delegation that met with Deb Haaland, the secretary of the Interior, at the foot of Avi Kwa Ame to explain the site’s significance. Under craggy granite spires, the tribe sang traditional songs that have been passed down over generations. After hearing their stories, Ms. Haaland was visibly moved. “She had tears in her eyes,” Mr. Hemmers recalled. 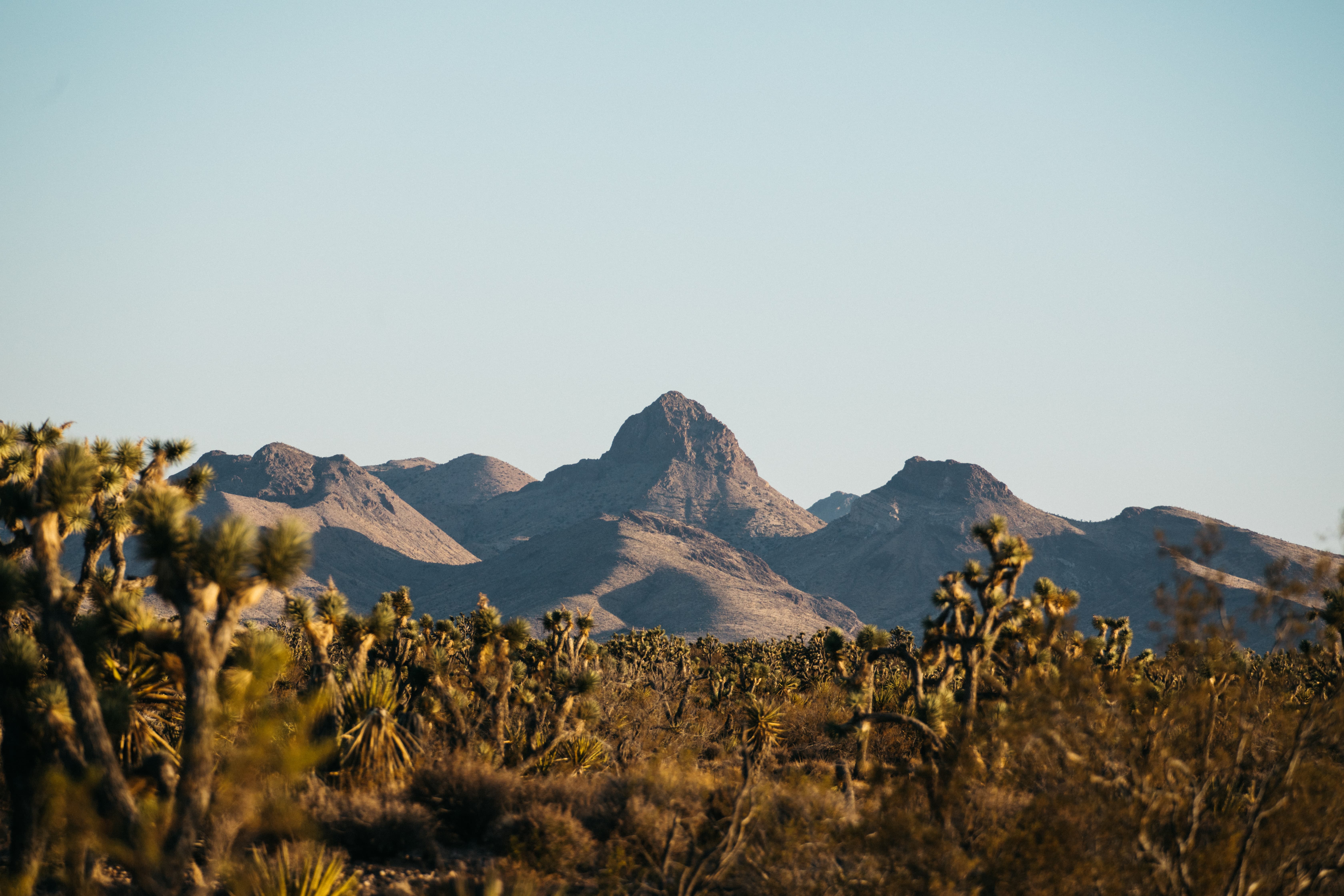 I was determined to get a closer look at Avi Kwa Ame, so I left the Joshua Tree Highway and rejoined Highway 95, then turned left at a junction marked Christmas Tree Pass. The name comes from a local tradition of dressing up the surrounding juniper trees with tinsel and glass baubles during the holidays, a practice many tribes consider offensive. Since the 1990s, the Bureau of Land Management has tried to discourage such defacement, but the shiny ornaments remain.

A flat dirt road took me through vast desert scrub until I found myself entering the foothills of Avi Kwa Ame. According to Fort Mojave mythology, the creator god Mastamho emerged from these foothills to start the work of shaping mankind. In their eyes, he still resides here.

The high canyon walls held slanted rock formations that resembled ogling faces. I was solidly in the backcountry now, my car dwarfed by mountains that were dizzying, elegant and layered with history. I had to keep stopping to admire the shifting texture of the rock, which varied from busy, jagged spikes to swollen, bulbous mounds. No cars honked or tried to pass me, because so few travel the 70-odd miles from Vegas to get here.

I spent a few minutes ambling at the mountain’s base, then got back in my car. Avi Kwa Ame may be the monument’s holy center, but at such close range, its character eluded me. Instead, I had to step back and see the mountain in the context of its architecture, like an altar inside a Roman basilica.

I pressed on, and emerged at the other side of the canyon, where the vistas became limitless and painterly. I stood on top of a ridge that plummeted 3,000 feet into Lake Mojave, and gazed into the distant reaches of western Arizona. It was dusk, and a fiery orange sunlight spread slowly over the step-like mesas. It was staggeringly beautiful, and the spectacle was over in a few minutes.

Alex Schechter is a travel writer based in Las Vegas.

About The New York Times

Where the conversation begins. Follow for breaking news, special reports, RTs of our journalists and more. Visit https://t.co/ghL9OoYKMM to share news tips.